The BYD Group is the world’s leading Lithium battery manufacturer. Warren Buffet’s Berkshire Hathaway holds 8% of the US 150 billion company. It employs 180,000 employees with a yearly turnover of over AU$28 billion, headquartered in Shenzhen, China.

Established in 1995, BYD is listed on both Hong Kong and Shenzhen Stock Exchange, and specialises in forklift, automotive, electric vehicles and buses, as well as new energy(solar) and IT, with its ultimate goal to spur mass-market adoption of green energy and be environmental-friendly, reduce pollution and resolve globale energy crisis.

The BYD forklift started its operation in 2010 in Shaoguan, China, with a one million square meter, 50,000 units production per year factory, equiped with the latest manufacturing technology such automatic robot welding. The BYD forklifts has been since then marketed in China, Asia, Europe and America. eForklift as the sole distirbutor started to introduce the BYD forklifts to Austrlia and New Zealand since 2019. 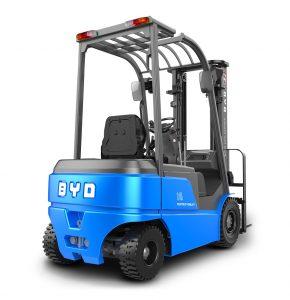